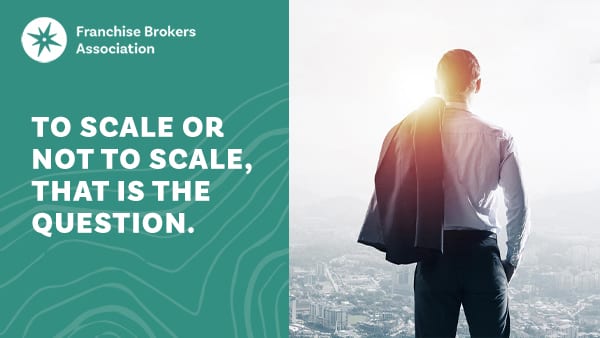 To scale or not to scale, that is the question. Franchise opportunities often offer the option to purchase multiple territories at the same time, but the question is, is that a good idea or not?

Let’s take a look at the varying points of view on this topic.

Why would someone want to be a multi unit franchisee in the first place?

Multi-unit ownership is not for everyone. It tends to attract people who want to build larger businesses, typically they have to be emotionally strong and confident, and know they are able to handle bigger projects.

This type of ownership requires more patience, more strategy, more attention to detail, and strong financial acumen. Most of all, multi-unit ownership is for those people who have a big vision for where they see themselves going, regardless of where they are today.

Some of the advantages of multi-unit operation are in the capital outlay, the role of the owner, more buying power, and larger financial opportunities.

In addition, banks give more favorable terms to owners of additional units. They want to give out this type of loan. These loans are the lowest risk loans for the bank.  As result, the ability to get financing is significantly easier when you are a proven operator of the same business.

As a side note here, banks like to see two years of track record before implementing this strategy. Once this occurs, you move into the sweet spot for funding and then they are more willing to fund larger – and larger projects for you.

2) Role of the owner

Once investing in a multi-unit franchise investment, it is important to understand what your role becomes as the owner of the business. Responsibilities can include leading an executive team, reviewing performance dashboards, and spot check operations.

You will be handling higher level issues such as state licensing, insurance, and vendor agreements. Together, you and an accountant will look for additional revenue opportunities and to discover waste. During your journey, you will also work on the development of next locations.

As a franchise owner there tends to be significantly more buying power then independent businesses. Larger operators also have more clout with the franchise system itself and are offered more opportunities. For example, as a multi-unit operator, when other franchisees are ready to sell, multi-unit operators are typically given that information first. It makes the most sense for those proven existing multi-unit owners to take over those businesses because this solution has the lowest down time during the transfer, and the highest likelihood of success.  There is access to better staff because the staff expenses are spread over more locations, and there is access to better negotiations with local vendors when purchasing equipment and other goods and services. If you can offer a vendor a 5 store account instead of a single store account, the reality is, you get better deals and more attention.

Larger financial and equity opportunities will arise with multi-unit franchise ownership. The multi-unit owner can use the businesses to develop other business interests. This includes assets like real estate ownership, equipment ownership, interest in main supplier businesses, rebates from suppliers, financial services such as financing to customers, and the list goes on.

I remember sitting in a panel session at the multi-unit franchisee conference early in my franchising career. On the panel were multi-unit franchise owners with various empire franchise brands, mostly restaurants. One speaker in particular stood out to me.  She was talking about her journey from one unit to five units. She was explaining how hard the first three units were, and that they required a lot of work for her to build them, grow them and manage them.  She said at four units she hired a regional manager and her life totally changed.  She wasn’t as profitable at the four units with the manager’s salary, but her experience was much better. Then she said when she got to five units, she had the best of both worlds, the support she needed and the margins – which made sense for her business.

She had a mind for aggressive growth.  She wanted to build an empire of franchised locations and she said once she got to five, adding additional units was simply part of the formula and allowed her to grow a substantially large franchise empire. I was so inspired by her.  She had a vision, she put in the work, she built it through the initial phases, and then once she got to that fifth unit, her whole life changed for the better.

4) Timeframes and the value of extra territories

If it is a quickly growing franchise in a good market, (we hope you are getting both) when you delay, chances are the territory you wanted (for the second unit) will be sold to another franchise owner. Good franchises go quickly in the best markets.

The flip side to that is-  what if you buy the second territory and then don’t do anything with it?

That happens as well for various reasons.  Sometimes when the original territory is strong enough, there isn’t enough time or need to build out the second or third franchise. The thing to know about this is, if it’s a strong franchise that’s growing, your franchise can come back and ask if you will sell those territories back to them, so they can offer them to new franchisees. A franchise only has so many territories to offer in the country. When they sell out in a market, they have to turn down all the remaining candidates looking to start there.

Think about that though, you typically get the franchise fee for a reduced price when you purchase multiples, and later it can be sold back for the full price.  When this happens, you can (in essence) get the franchise license fee you paid covered when the additional licenses are sold back.

The second reason why there are dormant territories is that the original territory is taking longer to get up and running before the second one is scheduled to be opened. An easy way to assist with that is to ask for more time on the development schedule with the franchise, so you can give yourself ample time to get the first territory performing well before expanding to the next.  This is an area where franchisors can exercise some flexibility in the negotiation and can help you set a strong timeline which is conservative and works for you.

There are many benefits to multi-unit franchise licenses.  If you are strategic about how you use those benefits, they can help you be more successful. If you’re not, the benefits can be lost.